There has only been one dog in my life that I believed had “heart”. Yet what does that expression mean?

“This middle region or heart chakra transforms the qi energy into shen or spirit energy. Such heart is associated with love, compassion and being selfless. “  The True Meaning of Heart

Years ago I rescued a Shetland Sheepdog puppy, Briggs, from the animal shelter where I worked. He transformed into a hard working obedience show dog.  We traveled up and down the west coast and north as far as Canada.  When he was confident with an exercise he would give me every piece of himself, going above and beyond.  He was all about pleasing me, being with me and playing with me.  I don’t think he ever forgot the fact that as a small puppy a spiteful man had taken a match and burned his whiskers.  The moment I put Briggs in my arms he was forever safe and loved.  I used to say, after a particularly long show weekend, that Briggs had “heart”, he was the type of dog that would lay down his life for me. 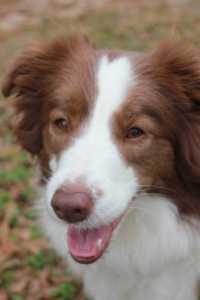 My brown and white Border Collie Razz is sweet and cute and soft. But I’ve seen a bit of a stubborn streak in her as well as a sensitive, willing need to please me.  If she knows an obedience exercise, if she is absolutely sure that I am happy with what I have asked of her,  she will perform it again diligently.  But she has been overwhelmed in my house by the presence of my other Border Collie, a young blond male, Bodie, who is flashy, pushy and smart.  He is easy to train because he loves to work.  But there has been something about Razzie that I saw that pushed me to never give up on her, to not shuffle her behind Bodie’s training.  She reminds me of Briggs.  She wants to please, to work, to be right.   Yet although I’ve helped her learn the obedience exercises, sometimes she seems blocked, uncertain, afraid.  What could I do to make her understand?  I wanted to believe that she wasn’t stupid, that she could do an exercise if only I could communicate correctly what I expected from her.  We were both stuck, not connecting, going through the motions but not moving forward.

Friends and trainers suggested changing one method or another to help Razzie learn a difficult exercise, for example, to learn to never lag on the heeling exercise, to push herself to stay by my side. Over the long winter I kept up with her training, not attending shows until she was ready.  Finally in May I sent the entries in for a trial in June. But had we progressed and were we ready for a show environment?  More than once I wondered if I should give up on her and concentrate on Bodie.

I entered Bodie and Razzie in the Tallahassee (FL) Dog Obedience Trial on June 3rd and 4th.  On Saturday morning we were one of the first people at the show.  Razzie was entered in Novice B at the early hour of eight a.m.  There was no time to be nervous but I was a bit tense as we stepped into the ring.  She did a nice job, a bump here and there on the figure eight, a crooked front on the recall, both items that would plague us throughout the weekend.  But she won the class with a 196.  High in Trial was a 196 ½. We were so close but the bigger picture was that my girl was confidently heeling in the show ring.  I was ecstatic.

That afternoon we again went into Novice B ring for the second trial. Sweet Razzie worked better than the morning trial. The long winter of training had paid off.  We again won the class, this time with a 197.  Another dog had earned the same score in a more advanced class so we were in a run off for High in Trial.  The other dog was older and more accomplished, an Obedience Trial Champion.  I let that fact get into my head.  I told myself there was no way we could win, why try?  I don’t do well at run off’s.  The result was that I was not doing my best to be the other part of the team.  Razzie was giving me everything she could but I was not giving MY best.  Sure enough during the heeling pattern Razz had one lag and I made a slight handler error so we lost the run off.  It was discouraging to be so close to the trophy.  See, I told myself, you never win run offs.  Why even try.  But there was still one more chance to excel the following morning at eight a.m. again.

We were ready to go into the ring early Sunday morning. Could we do it?  Could we bring our score up even higher? I dreamed about a 198 ½.  I dreamed about winning High in Trial.  I imagined it, felt it, worked with my sweet Razzie in the ring as if we could do this.  We were an unstoppable team, in my imagination.  I loved my dog even more at that moment when we stepped into the ring on Sunday.  She and I had become a team, finally.  I trusted her and she was finally confident about her job.  The moon and the stars aligned and when we left the ring people cheered.  But we still had sits and downs.  During the long down she heard Bodie bark in his crate and she wagged her tail.  My heart beat faster.  Would she hold the down, once an exercise that she couldn’t maintain when she was a puppy?  But she knew her job, only wagged her tail, crinkled her eyes in that happy way she has to let me know she’s content, and finally put her brown and white muzzle between her feet and rested.  Whew.  Back we went into the ring for awards and the judge told the crowd and exhibitors to be quiet when clapping because there were other dogs showing in two nearby rings.  But when the judge announced my score of 198 ½ her request was forgotten.  As I walked out of the ring back to my chair I started to cry.  Razzie and I were finally in synch and having fun.  I gave her a few treats as her reward and sat down.  Would the score stand for High in Trial?  I looked longingly over at the nearby trophy table where the large, flowing yellow and blue rosette lay along with a silver trophy.  But I reminded myself that there were several excellent working dogs with advanced titles at the show.  I didn’t want to get cocky, too overconfident, but oh, how I wanted to win the Highest Scoring Dog in Trial award.

Razzie’s next class was a relatively new non-regular class called Wild Card Open. We could choose an exercise that would not be scored but otherwise the class would be run similar to a regular Open class with jumps, a dumbbell and off lead heeling.  As we started the heeling pattern something in the audience spooked Razzie.  She fell apart.  She couldn’t heel, left my side and did poorly in the jumping and retrieving.  Worst of all was that we had lost our connection.  But I was too busy showing two dogs in five classes to dwell on her problem.  Bodie was next in the ring for a similar class, Wild Card Novice.  He pranced his way through the class with few problems.  He still can’t give me a perfect “front” position and we have the hyper dog bumping problems, things that will work out with training, time and maturity.  He’s an easy dog to show because he doesn’t give me any worries.

While I was in the Wild Card Novice ring with Bodie the last regular class had ended in the next ring. No one said congratulations to me on winning a high in trial so I assumed that we had lost to a higher scoring dog.  But then a judge told me I was in a run off.  The other competitor and her dog had won with the same score, 198 ½.  My heart hit bottom.  I psyched myself out of thinking positive, saying to myself that we could never work a perfect heeling pattern.  Then I remembered what a friend had texted me the night before, “Be calm and concentrate on yourself, your footwork and cues”.  She was right.  The other person I was competing against is someone I have trained with, someone who has helped me immensely over the years.  Her dog is excellent, and the pair have won several High in Trial ribbons as well as earning a rare perfect score of 200.  If nothing else it was an honor to share the run off with her.  I calmed down and got Razz out of her crate to prepare for our moment in the ring.

When I am in the 40×50′ matted obedience ring with my dog it is hard to know precisely how we appear to the judge. Did I swerve a bit?  Did I move too slow on the fast, too fast on the slow?  Was Razzie perfectly at heel position the whole time?  The judge finally said, “Exercise finished”.  Razz and I stood outside the ring to watch my friend with her Golden Retriever.  Her dog worked like a professional so I assumed the judge would immediately give dog and handler High in Trial.  I turned to put Razz in her crate and let myself wallow in self-pity.  But this particular judge has a great sense of humor and wasn’t one to let a moment for drama pass.  He left the ring, walked to the judge’s desk, turned to the audience and said, “Oh, do you want to know who won the run off?  Dog number fifty!”  That was my dog, the little brown and white Border Collie, my sensitive sweet girl with the spark of grit that only a few people get to see.  She forgot the noise in the crating area that had bothered her twenty minutes before.  She had entered the ring, giving me her all. 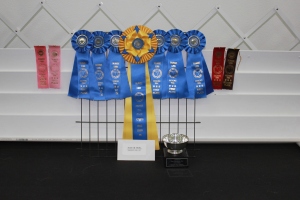 But wait, there’s more. After pictures were taken and I was awarded the trophy, the precious blue and gold rosette and an envelope with fifty dollars, I gave everything to a stranger, grabbed my dumbbell and Razz and I went into another ring for our first attempt at Graduate Novice.  Would she be able to heel yet again and jump after competing in six classes already over the weekend?  Amazingly she made it through the class.  This time there were more front and finishes, another level of difficulty than the Novice class but she earned her first Graduate Novice leg with a pretty good score of 190.  That’s when I realized that she has what Briggs had, “heart”.  She gives of herself unselfishly, out of love and respect.  I know now she loves the game I ask her to play with me. 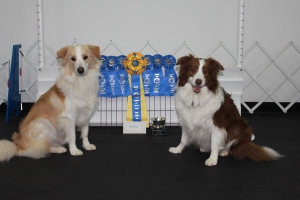 Not to be outdone Bodie ended the show with his second 198 ½ from the Beginner Novice class. It is time for him to start going up the levels of obedience too.  He showed me that although he can be goofy outside the ring he can be all business in the ring where it counts.

This weekend we made many more memories to look back on in the future, pictures to review, ribbons and rosettes to touch. But I’ll never forget my three Border Collies that love this sport that I have asked them to share with me and especially one dog who has shown me her heart.  Good times.

One thought on “Razz-A Dog With Heart”