My boredom has reached epic proportions.

Only five days on the injured list and already my boredom has reached epic proportions.  I’ve succumbed to doing detailed housework.  Have you ever looked at places in your home that were exceptionally dirty and thought, gee, someone should get down on hands and knees and clean that?  But knowing that someone is you and hopefully no one else sees it, so days and weeks and months pass and the dirt gets darker?  Well, be careful what you put out there into the universe.  The cleaning opportunity was forced on me this week, a chance to wipe off germs, dog drool and mud from tiny crevices.  Do you know that grate thingy at the bottom of the refrigerator that won’t come off but attracts brown ugly dirt?  It’s now spotless.  So of course I had to take a picture because who knows how long it will remain white and how long before I’ll clean it again; when hell freezes over possibly.

While down on my hands and knees, dishrag in hand, I thought of a funny memory from back in my youth, when my family and I lived in Scarborough, Maine.  My mom and my brother, Jimmy, and I were sitting at the kitchen table and I was whining about a problem with my much-loved and used blue, one-speed, fat-tire, pedal-breaking bicycle.  My brother, ever the jokester, said that the best thing to fix it would be some Elbow Grease.  I was the opposite of my brother, very serious.  So in my innocence I said, “Where can I get Elbow Grease?”  The two of them broke out in hysterics and I remember being mad because they were laughing at me for no reason.  It wasn’t until years later that I found out what elbow grease is.  Now I’m embarrassed for being so naïve.

Of course, while knee-deep in dog hair and spit this morning, old toothbrush and wet rag in hand, the puppy decided to “help” me.  I blew a raspberry on the side of his fuzzy coat and he ran off in surprise.  Later he returned to sniff and inspect my work, licking the clean wooden trim with his seal of approval.

I don’t remember ever doing much housework as a child in Scarborough.  The four of us lived in a small single-wide trailer.  Dad was stationed at the Coast Guard base in Portland.  He was an officer and all his work uniforms had to be perfect, no rumbles, wrinkles or stains.  I remember that my mom, her friends and one very young step-child did hours and hours of laundry and ironing.  The laundry basket was a constant feature in everyone’s homes, as was the ironing board and a glass coke bottle with a small pin-holed stopper, the bottle filled with water to create steam.  The irons must not have had a steam setting in those days.  No one had the luxury of owning a wash machine and had to use the trailer park’s laundromat.  Clothes were dried on your own clothesline, no dryers were available back then.  I’m sure the concrete laundry building was gossip central.  My mom never brought me in there, ever.  Perhaps the gossip was too raunchy, who knows.

I remember decades later my brother said he wanted to inherit mom’s old wooden ironing board.  It brought back so many fond memories of their time together.  Unfortunately Jim has passed on but I still have the wooden ironing board so “I” can enjoy those memories for him.

It’s at least fifty years old and entirely made of wood.

My Mom always had a clothesline, even though they could eventually afford clothes dryers.  But she said dryers were expensive to run and rarely used them.  Her hours of ironing and standing outside hanging clothes were ingrained habits that stayed with her for her entire life.  How times have changed. 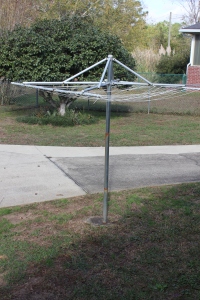