Yesterday morning (12/26/12) started out cold and windy, after a night of heavy rain and lightning.  The dogs were anxious to go outside and play.  Cold weather is not a problem for them with their heavy Border Collie fur. 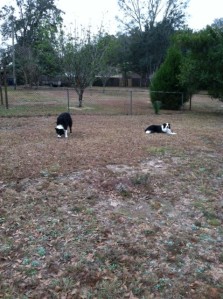 On Christmas Eve I released Catcher to the back forty with the word, “Squirrel!”  He took off after a young grey squirrel that easily out ran him.  The dog and squirrel played Ring around the Rosie at the base of a Lodge Pole pine.  Instead of the squirrel simply running up the tree it chose to tease my dog.  I lost interest and walked away since none of my dogs have ever caught a squirrel.  On Christmas day Catcher was rolling blissfully in something that I was sure would smell ripe once he came inside my warm house.  I strolled over to see what he found so enticing.  There was nothing on the ground, but I did notice Catcher dodging around me, running away as if I was going to take something away from him.  It was then I noticed he had a squirrel tail in his mouth, which he was eating.  No amount of obedience training could get him to drop the tail.  He was a happy dog.  He was the great hunter.  He had a stomach ache later on that night but never complained.  This morning I believe I learned what happened to the squirrel.  While my dogs chased each other in back of the garage I noticed a beautiful, red fox at the bottom of the fenced yard.  It looked at my dogs, stopped and stared, and then bounded effortlessly over the chain link fence.  My dogs were clueless.  It wasn’t until this evening when I did a Google search online that I learned red fox eat squirrels.  No doubt my smart fox found this young, inexperienced squirrel an easy catch.  I’ve seen this red fox before, or one of its littermates.  My neighbor a few doors down from my house has chickens, which explains why the fox makes her home in the surrounding woods.  The fox was delightful to see.  Her coat is a rich orange color set against the black trim on her tail, with heavy black mascara around her eyes, making her look like a Hollywood movie star.  I hope to see her again but hope she doesn’t leave squirrel bodies in the yard again for Catcher.