Waiting for Godot – The Repairman

My first visit yesterday morning was from the Terminex guy.  He was checking for termites.  We had a thunder and lightning storm in the morning so he was understandably late.  Can termites swim? When Mr. Terminex arrived there was no evidence of the little critters, either inside or outside, thank goodness.  They were probably hiding out in our Lodgepole pines, which an arborist advised me were infested with them.  Great.  If the lightning doesn’t kill the pines, the bugs will.  Better the pines than the house, which by the way is made mostly out of brick, which is common here in Florida.

While waiting for Mr. T I did twenty minutes of obedience training in the living room with my ten month old Border Collie, Catcher: stand, sit, down stays, fronts and finishes, interspersed with lots of play time with his rubber cow toy.  The dogs love them.  Check out www.helpingudders.com to purchase them and support your favorite breed rescue organization.

The housework was done but the rain continued to diminish any chance of walking in the yard with the dogs.  On to the next project, making Cranberry Freezer jelly.  The recipe is from a Taste of Home magazine that I saved years ago. 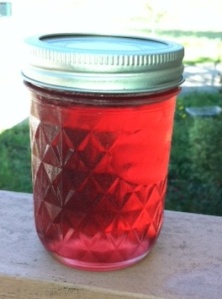 Remove from heat; skim foam.  Pour into 7 clean, hot 8-oz jars or into moisture-vaporproof freezer containers, leaving ½ inch headspace.  Cool slightly; cover with tight-fitting lids.  Cool several hours at room temperature until set.  Store in refrigerator up to 3 weeks or in freezer up to 3 months.

The jelly is easy to make and delicious but filled with calories.  Sigh.  The only challenge was figuring out how to skim the foam before the jelly hardened and was poured into the waiting jars.  A quick look at the Internet led to a solution to the foam skimming problem.  Add one teaspoon or one tablespoon (depending on which website you check) before heating the juice and there will be no foam.  Thanks for www.pickyourown.org/foam.htm for that tidbit.

That project was finished and finally Mr. T came and went.  Now what?  More puppy training in the living room.  We have a lot of work ahead of us before entering the competition ring.  But next week the little guy has THE operation.  He doesn’t have an ounce of aggression.  He just has that frustrating (to me) ten month old Border Collie male attitude.  His attention span left when his hormones arrived.  Sorry dog.  My two other Border Collies are singing soprano too.  It certainly didn’t change their energy levels. And they don’t spend Saturday nights looking for a date with the neighbor’s poodle either.

At 3:00 p.m. I received an automated call.  The Sears techs were running late in our area.  Did I want to reschedule?  Or the tech may be very late.  My thought was that it was Friday.  He’s probably anxious to end his work week so he won’t be arriving at midnight.  I hugged the cat for a while, read a couple of magazines, contemplated my naval.  Still no repairman.

At 5:00 p.m. he pulled up in his blue van, having driven all the way from a call in Gulf Shores, Alabama.  But he patiently looked at the item to be repaired, a 1990’s era Lifestyler treadmill.  It appeared to be in mint condition, clean and shiny.  But when he got it up and running, it became apparent that age had taken its toll.  Parts of the belt roller were flying off in pieces.  He also checked out the incline system, which never seemed to work for me.  I found out it had to be manually inclined, an almost two person job.  The potential cost of repair is $289.  Monday I’ll call St Vincent de Paul and see if they want the treadmill, and some other items.  The technician advised me which treadmills are good for my use, what he uses, as well as websites and stores to check for sales.  He was a font of information.  Although the cost of the visit was not cheap, I figured nothing ventured, nothing gained.  It was worth it for the knowledge and to have a contact person for future workout machine repairs, should they be needed.  The Lifestyler cost around $350 and it lasted for about sixteen years.  I’d say it’s about time for a new one.  The thought of working out in my shabby sweats while I watch the dogs play in the kennel appeals to me.  Size seven here I come.